635 people responded to the Dupuytren Research Group Sixty Second Survey of the effect of Dupuytren on their handwriting. This survey asked three questions of people living with Dupuytren disease: 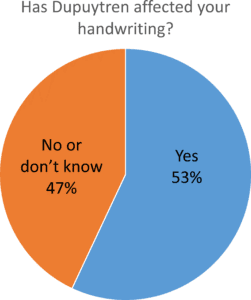 The majority of survey participants reported Dupuytren-related issues with handwriting.

This isn’t surprising in light of the effects of Dupuytren contracture on the range of motion. What was surprising was the percent of people who reported Dupuytren-related difficulty with handwriting who had Dupuytren but no contractures in their writing hand. This suggests that early stage Dupuytren may affect overall hand function to a greater degree than would be suspected from the visible findings of nodule or cord without contracture. If so, Dupuytren changes may exist in the hand before nodules appear. This concept was first suggested 50 years ago by Dr. Hanno Millesi, who found changes in the elastic quality of the palm fascia normal appearing areas in patients with Dupuytren disease. 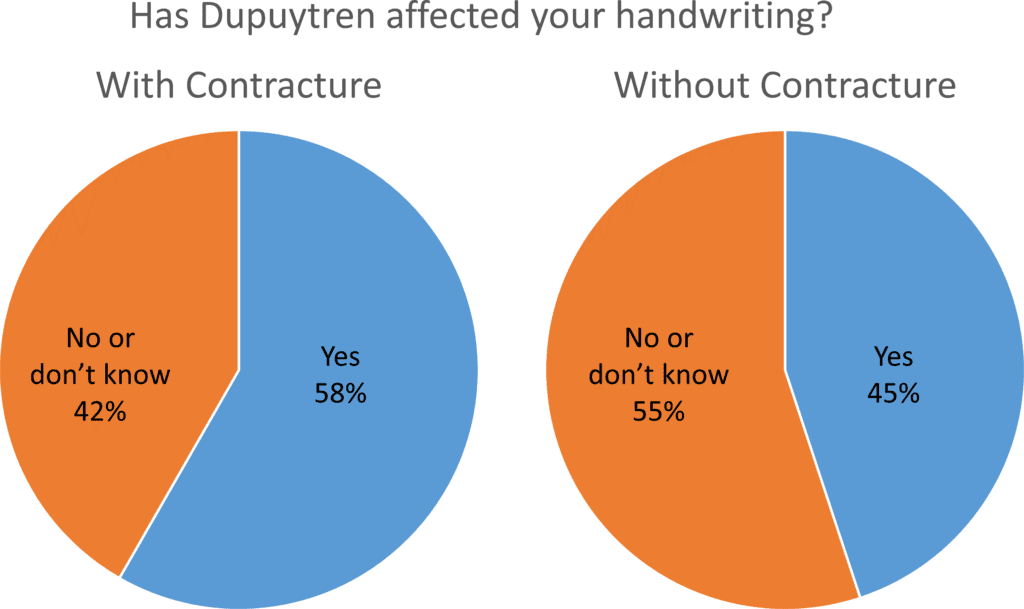 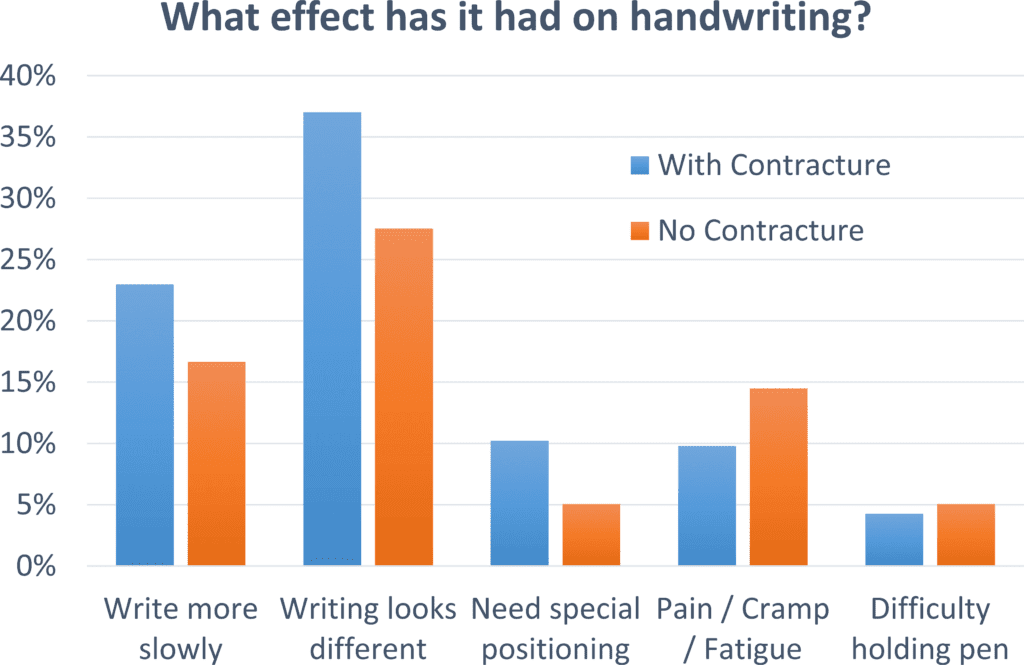 Almost as common were unpleasant changes in the experience of writing and technical difficulty writing. In the group of people who felt that Dupuytren interfered with their writing, two out of five reported writing more slowly. One out of four had mechanical difficulties such as positioning their hand on the paper because of bent fingers, difficulty holding the pen/pencil due to stiffness, pain, numbness, awkwardness, and the sensation that pen/pencil “didn’t feel right”. One in five reported inability to write for more than a few minutes because of pain and fatigue (“hurts to write”, “gets tired”, “starts aching”, “cramps”). A few reported difficulty bending their fingers to write because of painful knuckle pads.

The point of this survey was to ask how Dupuytren affects handwriting. The answer: more commonly and in more ways than one might suspect. Dupuytren can make handwriting less legible and the act of writing itself unpleasant or impossible. Six out of ten people reported that Dupuytren affected their writing hand. Six out of ten people with contractures of their writing hand felt that it had affected their writing. More important, almost half of those with writing hand disease but no contracture reported problems writing. This last group  – no contractures – would be described by surgeons as “doing well” (if they hadn’t yet been treated) or a “success” (if they had already been treated). Clearly, the surgical definitions of “doing well” and “success” don’t reflect the reality of living with Dupuytren disease.

Thanks for participating! If you weren’t able, look for a new survey each month. The best way to be notified is to sign up for the Dupuytren Research Group email Newsletter: Get Dupuytren News