The cause of Dupuytren disease is a team effort of risks and stressors. Genes play the major role in one’s lifetime risk of disease. Not everyone with Dupuytren genes knows it: many people are genetic carriers. They carry the Dupuytren genes and pass them on to their children, yet never develop the disease themselves.

Factors other than genes also affect Dupuytren behavior in people with Dupuytren genes. These factors (called genetic triggers or stressors) influence whether someone at risk ever develops the disease,  the age that Dupuytren first appears, and how rapidly contractures develop. Stressors are thought to include smoking tobacco, heavy alcohol use, certain medications, diabetes, heavy manual labor and others, including the effects of aging itself. The roles and mechanisms of these stressors are not clear. It’s likely that many stressors have not yet been identified.

All medical progress starts with single stories (anecdotes), becoming more convincing as more stories accumulate. This is a story which may be the start of progress in Dupuytren disease treatment.

Reports of Dupuytren disease responding to topical magnesium (“magnesium oil”) surfaced in 2013 with a short second-hand testimonial video and message board discussions which followed: http://www.dupuytren-online.info/Forum_English/board/dupuytren/another-dupuytren-in-town-needs-help-0_1966_2.html

I was skeptical but intrigued, because the contracting process which starts Dupuytren contracture involves calcium, and magnesium is known to block some of the biologic effects of calcium. I told a few patients with early Dupuytren disease about these reports and asked that if they tried topical magnesium that they report their results back to me. I was told that the magnesium oil dried the skin, that it was sticky, that it “Might have helped”, but didn’t hear any remarkable results – until recently.

I met Dr. Denise Nagel (http://www.huffingtonpost.com/denise-nagel-md/) six months ago to discuss options for her Dupuytren disease which had unusually severe skin involvement. She had failed both traditional surgery and radiation. Her skin was so affected by Dupuytren changes that I thought that the most reasonable options were either to do nothing or to have an extensive operation to remove the disease and the skin and resurface parts of her palm and fingers with skin grafts: dermofasciectomy. These are pictures of her hands taken around that time. At the time, each of her small fingers had about 60 degrees of overall bend. The skin was hard and tight – you can see it blanching from tension as she tries to straighten her fingers in these images. 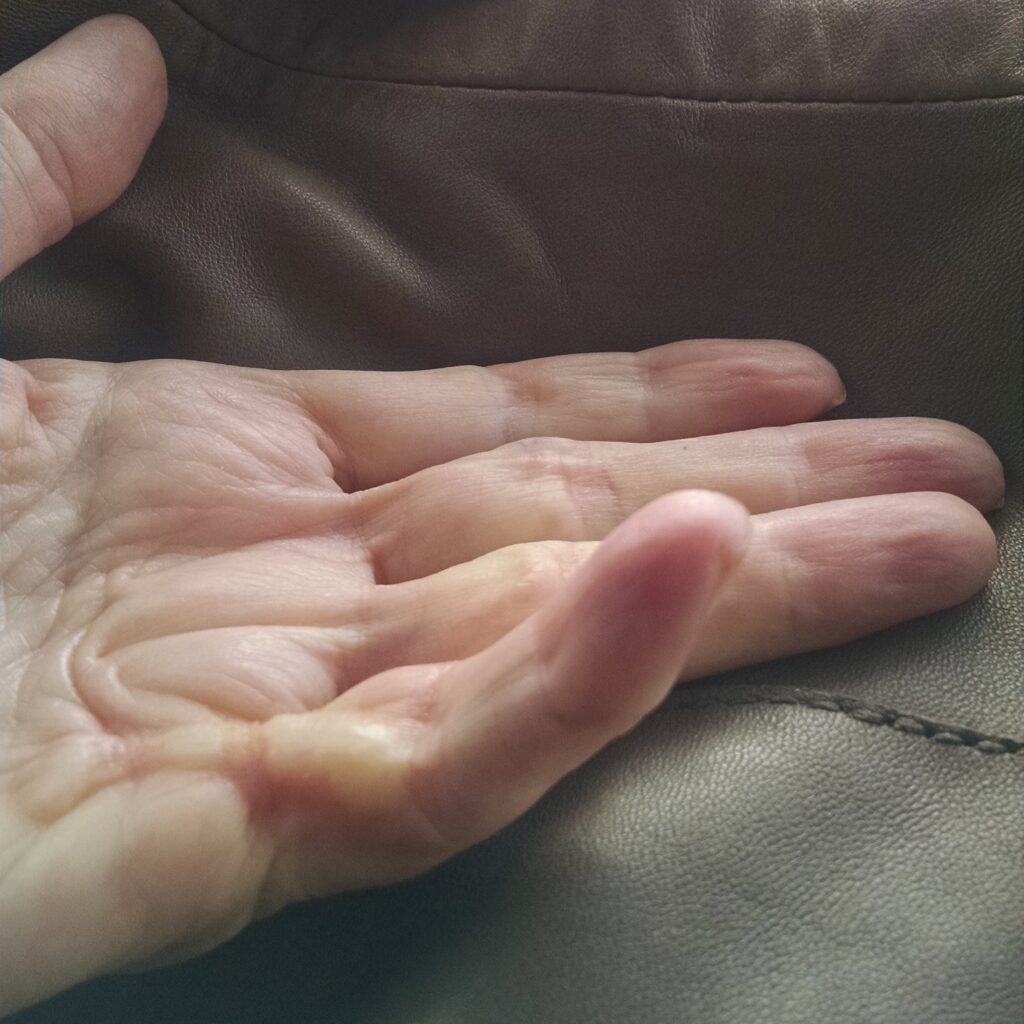 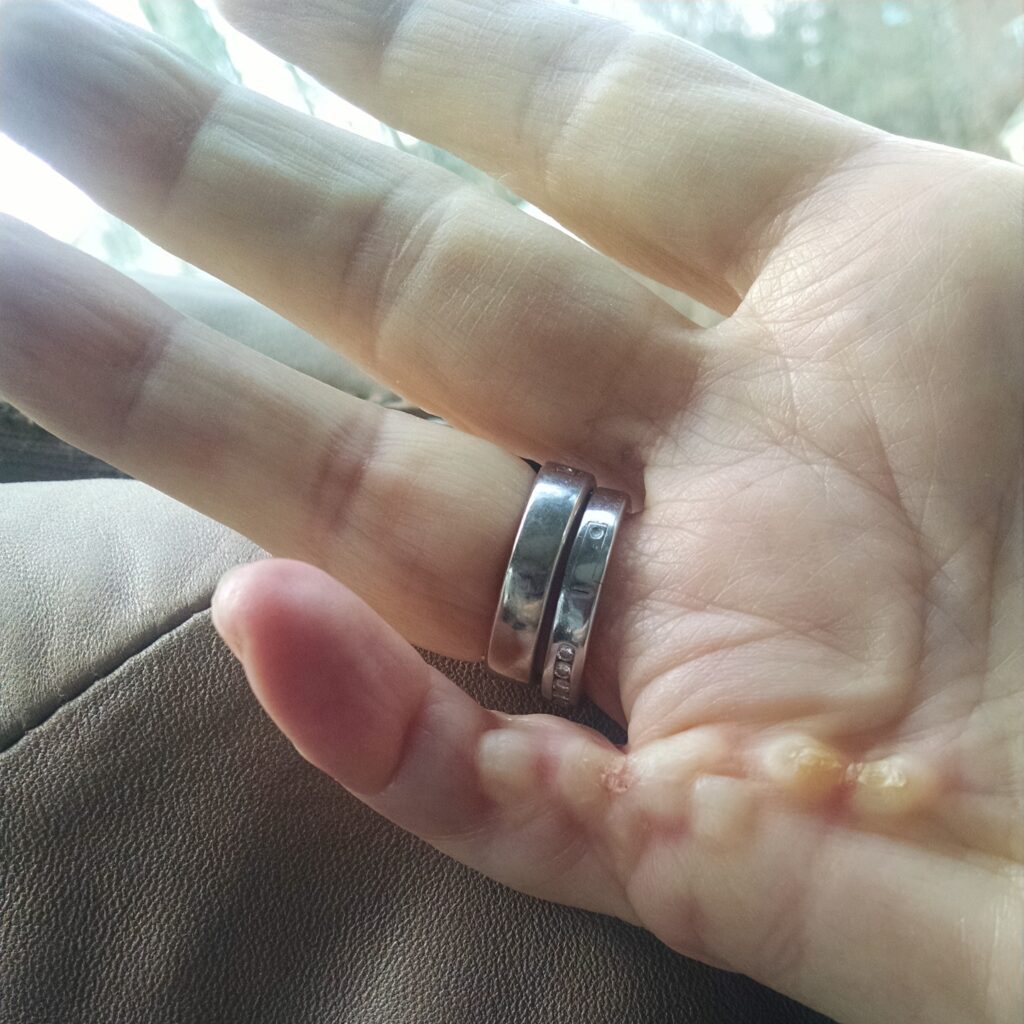 She sent me pictures six months later showing improvement of both hands – not normal, but better. I assumed that she had been treated with cortisone shots or collagenase injections. She explained that she had not had either, but that the improvement started shortly after she started taking a magnesium supplement for an unrelated issue.  When she noticed the change, she added topical magnesium but stopped it because it irritated her skin. Not only are her fingers more straight and her nodules smaller but her skin is softer and less tight. It is even more remarkable because she explained that just before this, her fingers were rapidly becoming more bent – not in months but weeks. These are the pictures that she sent: 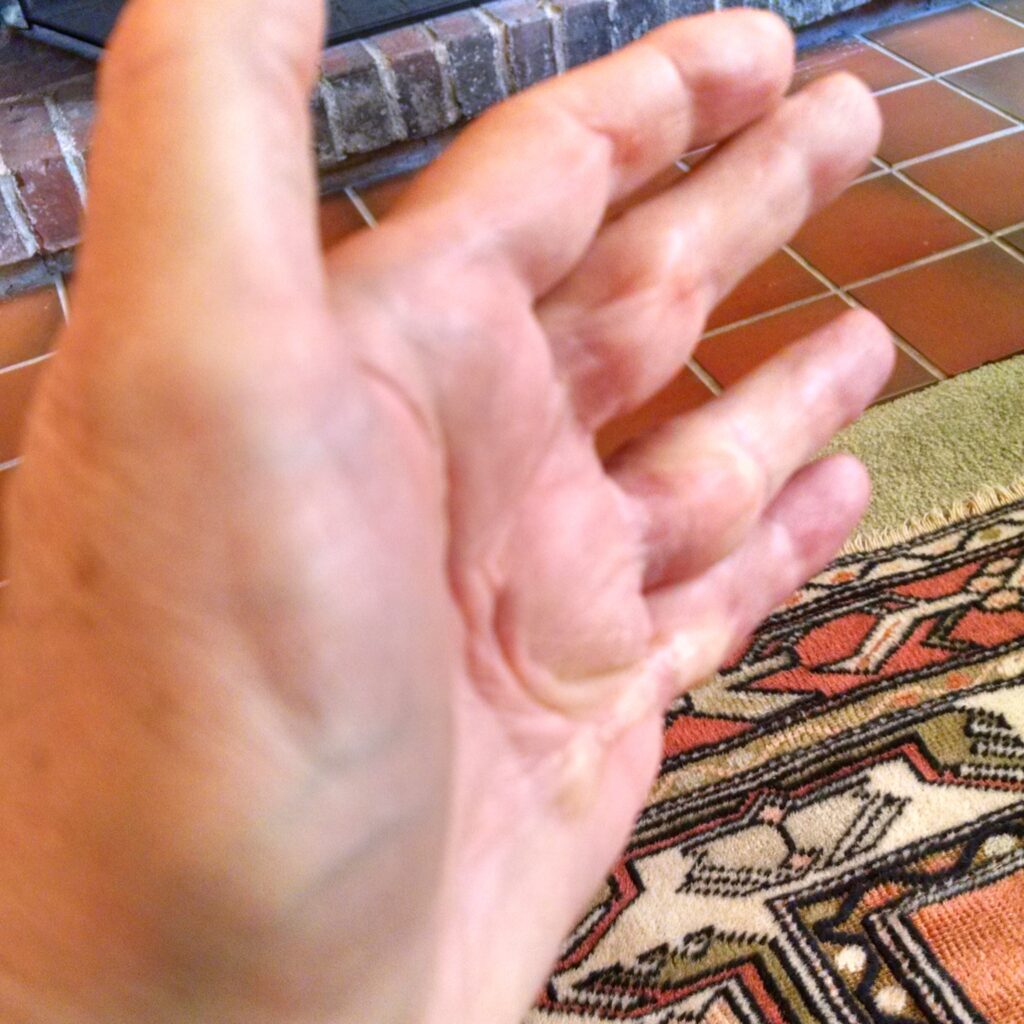 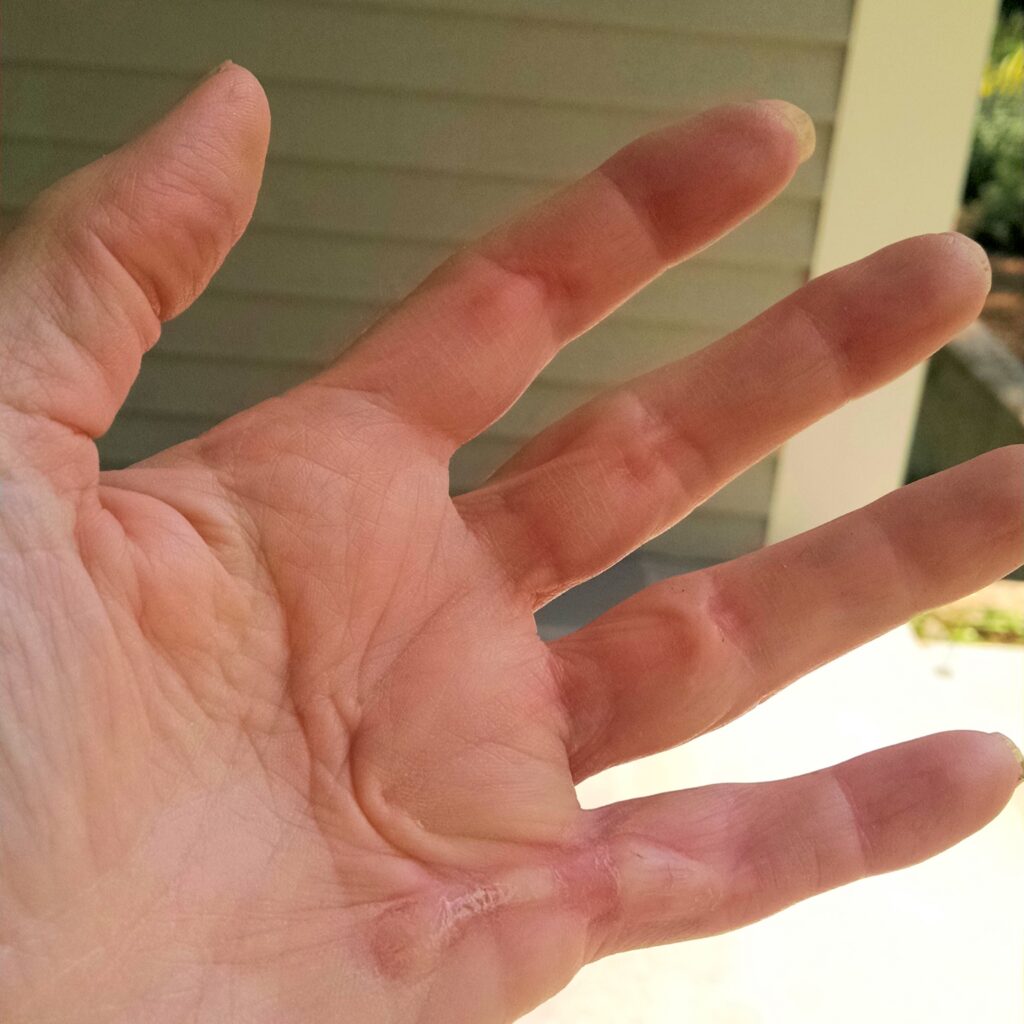 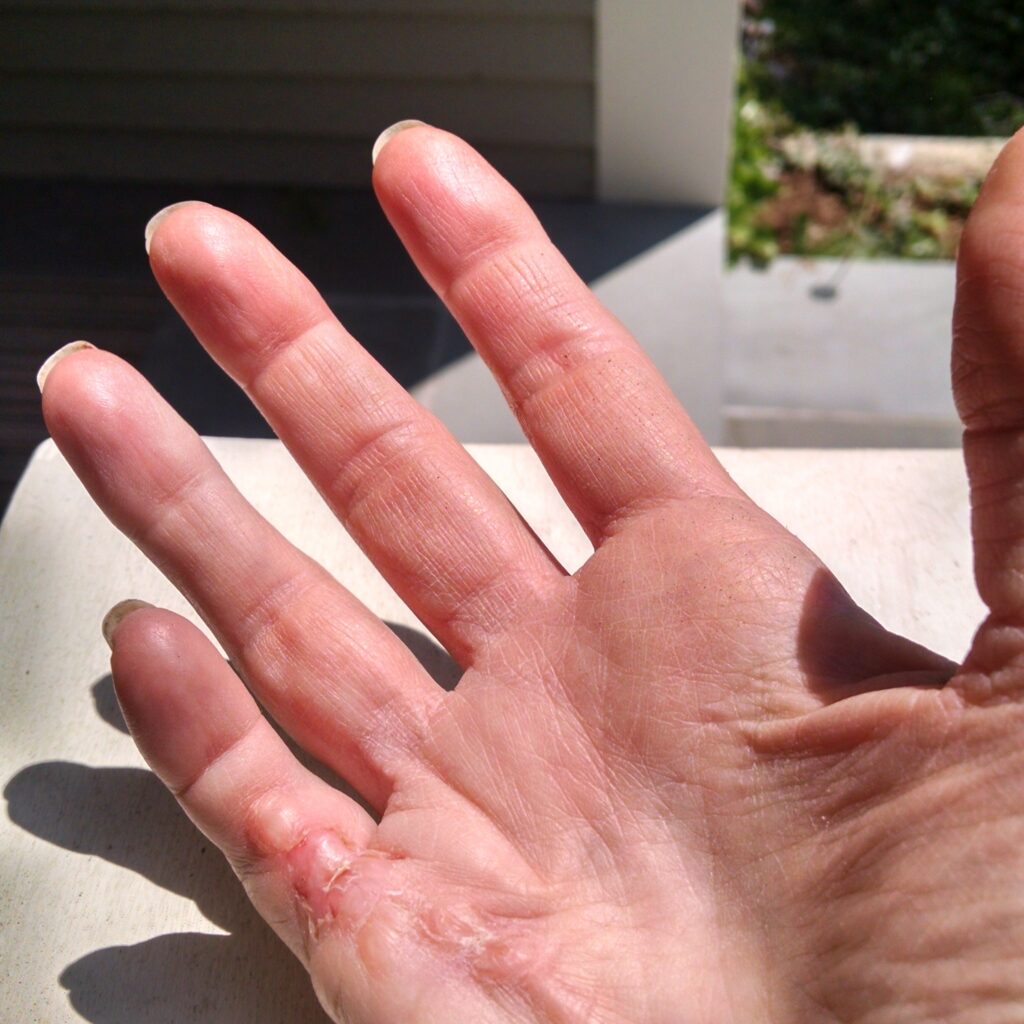 The shrinking of tissues in Dupuytren disease is a two stage process. The first stage is that specialized cells pull on the tissue from the inside. This first stage is temporary because after a short time the cells relax. Sometimes, while the cells are pulling, enzymes in the tissues trim out the slack in collagen strands next to the cells created by the pulling. This second stage permanently shortens the tissue, one strand at a time. The change remains even after the cells relax, as shown in this animation.

The cell’s pulling mechanism requires calcium. In theory, magnesium might block the cells from pulling on the tissues by reducing the effect of calcium. So… if the timing is just right, and a finger can’t straighten because of the combined action of a mass of cells contracting – but before the next stage of collagen trimming and pleating has happened, magnesium might make the cells relax and allow a finger to loosen. However, if the collagen threads have completed the stage of being shortened, magnesium wouldn’t make a bent finger straight. The clue here is that Dupuytren nodules are full of these contracting cells, called myofibroblasts. Denise, with very nodular disease and rapidly losing ground, may have timed her magnesium treatment perfectly. She’s reported her experience in her Huffington Post Blog: http://www.huffingtonpost.com/denise-nagel-md/magnesium-alterative-medi_b_10296538.html

Dupuytren disease varies. Many people have slow steady changes over years. Some have sudden phases of progressive bending over a few weeks. Rapid worsening may occur before permanent changes develop. This may be a clue to explain rare reports of bent fingers straightening from other treatments – radiation, cortisone shots, splinting. That might be the ideal time to use magnesium. Magnesium isn’t necessarily a cure. Instead, low magnesium levels may be the culprit. Low magnesium levels may act as a stressor, amplifying the effect of calcium on Dupuytren biology.