If a hand progresses from early Dupuytren disease (nodules, dimples, cords with no limitation of motion) to Dupuytren contracture, treatment should be considered.  The best compromise between the ordeal of a procedure and the best long term outcome is to treat either when the finger is either awkwardly bent or if the bend of one joint is approaches forty degrees, whichever comes first. Because there is no cure and return of contracture is common, the goal is to match the procedure to the individual so that the patient has the best result with the least lifetime ordeal of treatments.

There are three categories of procedures, each with advantages and disadvantages. Minimally invasive procedures such as collagenase (Xiaflex, Xiapex) or fasciotomy (needle aponeurotomy, PNF) average the shortest recovery and lowest complication rate, but last about half as long as other procedures before contractures return. Fasciectomy (with or without small skin grafts) has a longer recovery and higher complication risk, but is longer lasting. Dermofasciectomy and biologic barrier procedures last the longest before recurrence, but have the longest recoveries on average.

The relative indications for each of these categories are individual, based on the severity of contracture and the biologic aggressiveness of the person’s disease. These are summarized in this diagram: 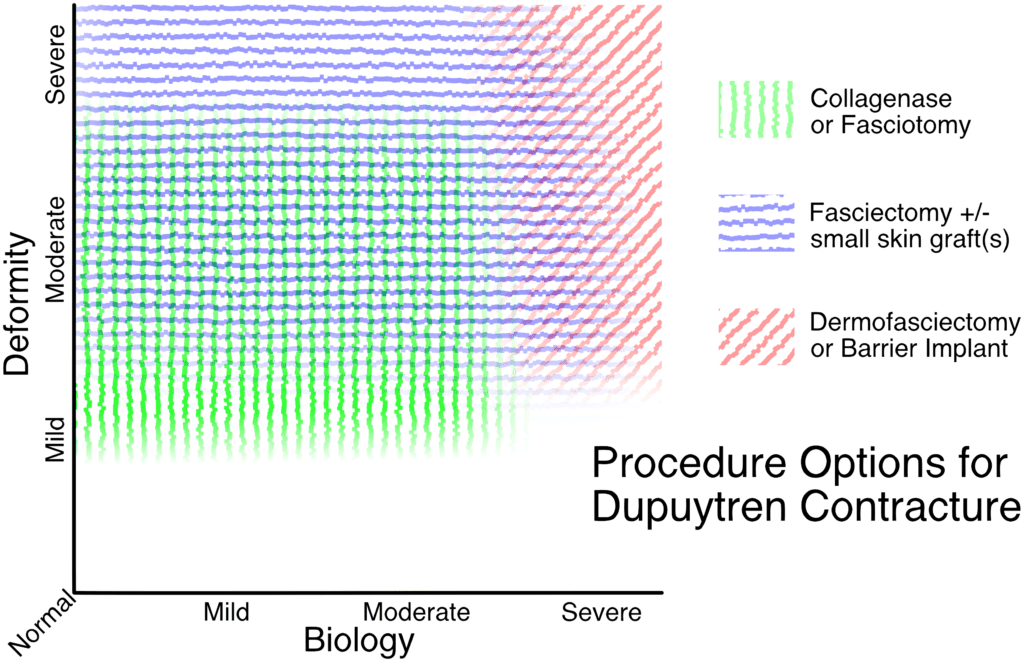 This diagram is just a guide. For example, fasciectomy may be performed on very mild contractures and mild biology, but for this scenario, on average, a minimally invasive approach will be as effective with less risk and recovery – even if there are recurrences which require retreatment. Similarly, minimally invasive procedures may be performed in patients with severe contractures and severe biology, but the likelihood of rapid recontracture in this context may make a more invasive approach a better value over the life of the patient. The diagram doesn’t address secondary tendon or joint issues or problems arising from secondary treatment. It also doesn’t illustrate the topic of preventative treatment for very early stage disease, which is another topic.

What is meant by mild, moderate, and severe? For deformity, surgeons will argue over exact numbers, but a joint contracture of 20-40º could be called mild, 40-70º moderate,  and greater than 70º severe. Severity is currently judged by adding up different factors, although there is not universal agreement of the relative importance of each factor. These factors include Dupuytren disease in immediate family members, Dupuytren diagnosis younger than 50, presence of Garrod (knuckle) pads, Ledderhose disease of the feet, three or more fingers involved, diffuse skin involvement, multiple palmar nodules, progression from diagnosis to contracture in less than five years, and others. More factors suggest more severe disease on average.

There are currently too many unknowns about Dupuytren disease, a problem which will remain until research identifies a laboratory test to measure Dupuytren biology – a biomarker. The International Dupuytren Data Bank is working to identify Dupuytren biomarkers as part of its overall strategy to develop a cure for Dupuytren Disease and related conditions. If you haven’t enrolled yet in this study, do it now!