HomeGeneralShine a light on Dupuytren?

Dupuytren biology has a lot of overlap with wound healing biology. One description of Dupuytren is that it’s like the body is trying to heal a wound that isn’t there. I used to worry that any treatment described as “promoting” or “accelerating” wound healing might be exactly the wrong thing to do for Dupuytren or hypertrophic scars. This was based on the idea that scar biology in Dupuytren was excessive, healing “not wisely but too well”: bigger, faster – similar to muscle hypertrophy. It’s probably more that excessive scarring in Dupuytren is slow scarring, a delay in the transition from early stages of inflammation to the final stages of stability. If this is true, photobiomodulation may have the potential to correct this problem.

Photobiomodulation is the current catch-all descriptive term for a light-induced biologic response, replacing a variety of older terms. The way photobiomodulation is thought to work has to do with how reflective color works. When light shines on a surface, some colors are absorbed into the material. The colors that aren’t absorbed reflect from the surface back to our eyes. That’s what determines the color we see.

Each color of light has a specific wavelength and specific energy of its photons. When the energy levels of the light perfectly match the energy levels of some of the electrons in a molecule, these electrons absorb the light energy. When the energy is absorbed, it may be used for some biologic purpose, or change the molecule permanently, or leak back slowly, which is how glow-in-the-dark paint works. For this to happen, there has to be an exact match between a specific molecule and a specific color of light. 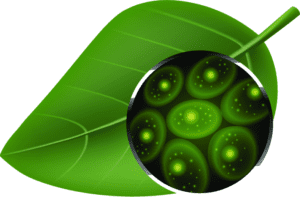 Chlorophyll is an example of photobiomodulation. Plants are green because chlorophyll molecules only absorb red and blue light but not green wavelengths which reflect back. Plants convert this energy to calories the same way we convert food to calories. That’s the reason some high-efficiency plant grow lights are only red and blue: those are the only colors chlorophyll absorbs. Plants can’t take in energy from green light precisely because plants are green.

Vitamin D is another example. Our bodies manufacture a form of Vitamin D that doesn’t work. When ultraviolet light of the right wavelength (293 nanometers, invisible) passes through our skin, it is absorbed by specific electrons the inactive vitamin D molecules. These charged up electrons permanently rearrange their connections, which changes the molecule from the inactive form to the active form. Pretty cool, huh?

Early work with biomodulation used lasers because lasers were the only source of single color high power light that wasn’t hot. Because of this, some laser light sources were marketed as “cold lasers”. Cold laser treatments were once heavily marketed as a treatment for carpal tunnel syndrome. Although there’s no consensus that “cold laser” treatment helps carpal tunnel syndrome, there are many research publications showing potential use of light therapy for other disorders: https://dupuytrens.org/dupuytren-literature-photobiomodulation/

The field has changed with the availability of high-power LED lights. The light source doesn’t have to be a laser. The only difference between laser and LED is that laser energy isn’t very affected by the distance between the source and the target, while LED energy drops off rapidly the further the source is from the target.

This is where photobiomodulation might enter the picture. Photobiomodulation also induces M1 ⇒ M2 macrophage transition, which is why it has anti-inflammatory effects. The specific wavelength sweet spots for this effect may center around 660nm (this color) and 830nm (near infrared; invisible).

OK, time for a reality check. Before setting up a red light tanning booth…

We’re working on a study to document the short-term effect of light therapy on Dupuytren nodules. This will be interesting, but won’t answer the question of whether or not light therapy has the potential to change the long-term risk of Dupuytren progression.

One of the more intriguing findings in this research is that the effects of local light therapy of injured areas can be measured in the blood: https://dupuytrens.org/DupPDFs/2014_Kuboyama.pdf. This fits perfectly with the International Dupuytren Data Bank research to identify Dupuytren-related biomarkers in a blood test. Such a test could be used to quickly measure and compare the effects of different light therapy protocols rather than having to wait years to see whether or not they worked. Very exciting!

Disclaimer: The Dupuytren Research Group has no relationship or financial interest with Tendlite, Joovv, or any other light therapy product or vendor.