The December 2017 Sixty Second Survey on Dupuytren Triggers was the most data-packed survey to date. This survey focused on a simple-sounding question: is the onset of Dupuytren disease triggered by an external event such as injury, physical activity, medication, or emotional 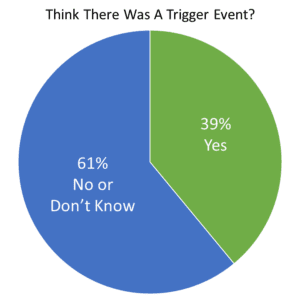 stress? Almost 40 percent of those taking the survey believed that some event triggered their first signs of Dupuytren disease. What did the survey show? Let’s dig in.

One way to test whether events trigger Dupuytren would be to survey people with and without trigger events and see who develops Dupuytren and who doesn’t. This isn’t practical. This study took the opposite approach: survey people with Dupuytren and see how many remember trigger events. The challenge with this is not knowing whether 40 percent is high or low for the general population. For example, a recent Harvard study found 49 percent of the general population reported a major stressful event or experience within the last year (https://media.npr.org/documents/2014/july/npr_rwfj_harvard_stress_poll.pdf). Percentages for other trigger categories in the general population are unknown. What to do? Knowing that Dupuytren is different in different people, this study correlated trigger events with different aspects of Dupuytren, such as the age of onset, number of bent fingers, nodules, and risk factors for aggressive Dupuytren disease. 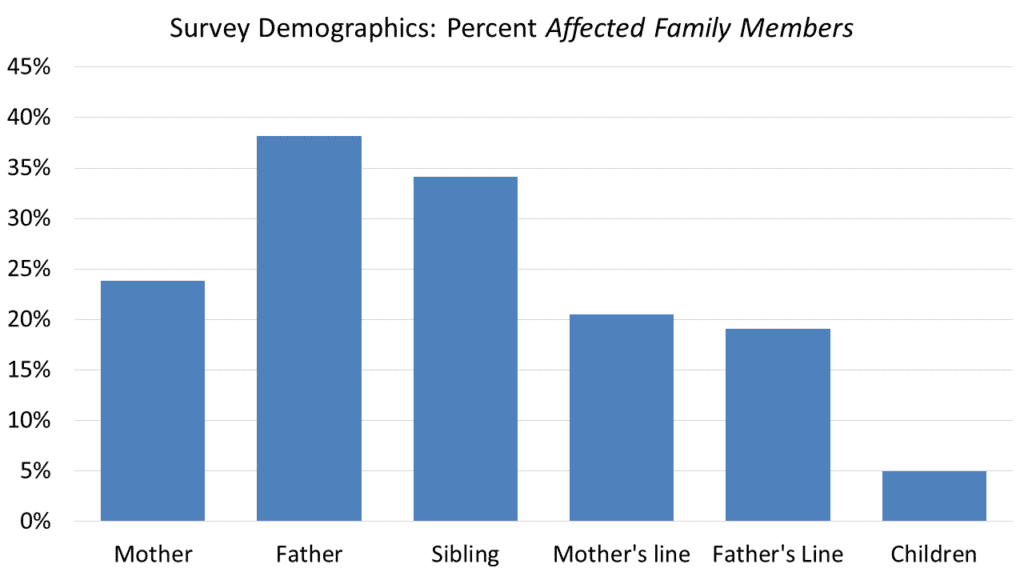 Both hands were affected in two-thirds; one-third had only one hand involved. Over four out of five reported Dupuytren nodules, fingers bent by Dupuytren contracture, or both. Six out of ten reported one or more Dupuytren spectrum disorders: knuckle pads, Ledderhose disease, frozen shoulder, or Peyronie disease. 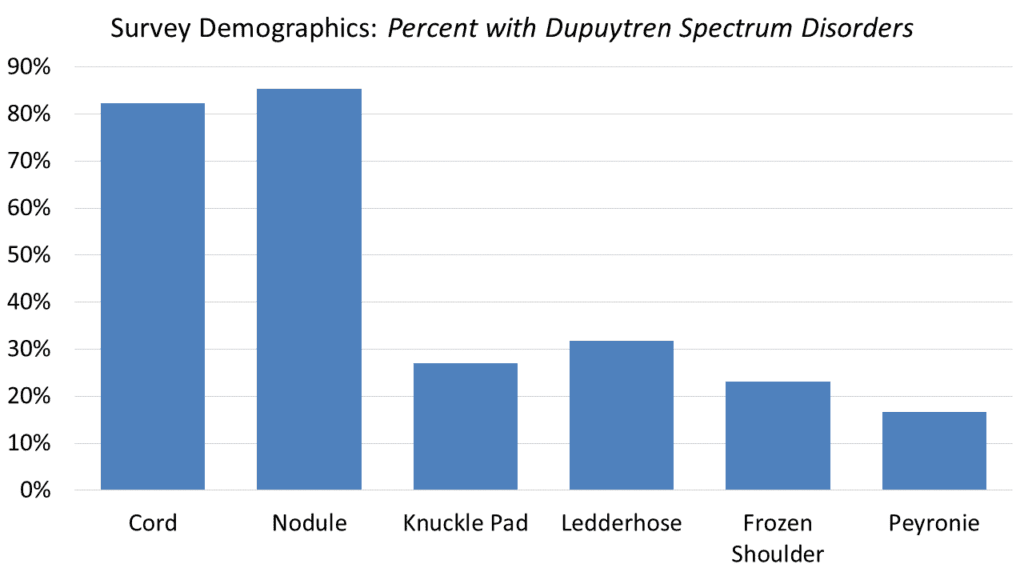 Age of first signs of Dupuytren is thought to correlate with Dupuytren aggressiveness. The average age of onset is typically reported as 10 to 15 years younger for men than women. In this survey, the age midpoint (half younger, half older) was 50 for men and 55 for women. This may mean the women taking this study had aggressive disease compared to the average. 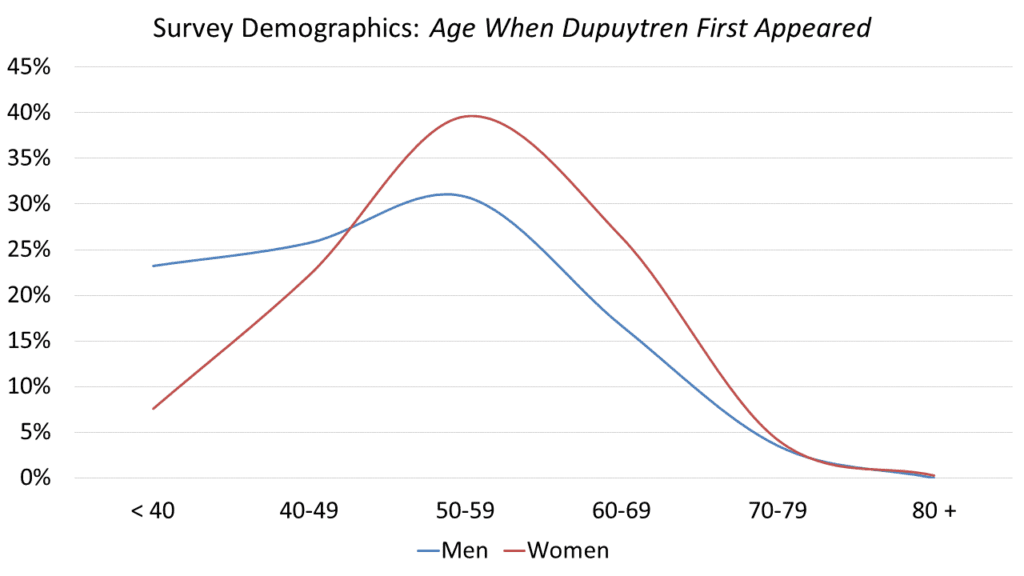 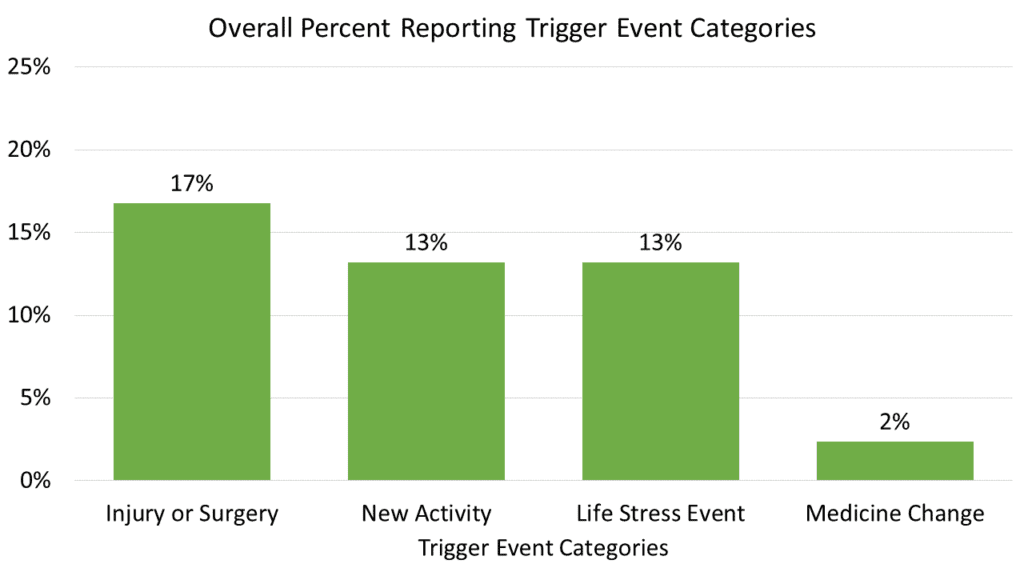 Statistical significance
Just because numbers look different on a chart doesn’t prove they aren’t due to random chance. The answer to this question is important, and enough people participated that it was possible to perform formal analysis for statistical significance. The Chi-squared test was used and only results with greater than 95% likelihood of being true are shown below. 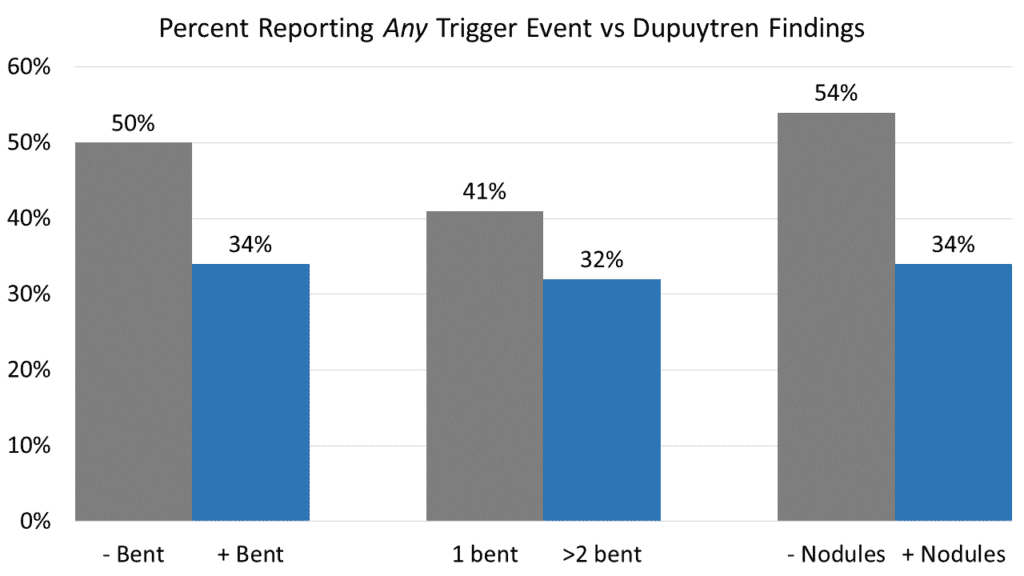 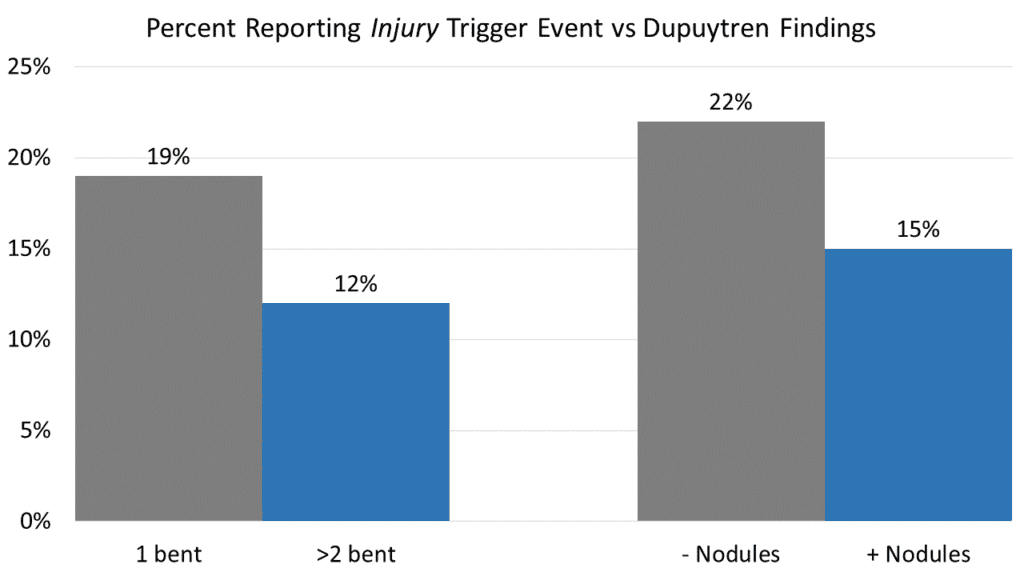 Stressful life events
Almost twice as many people who never had finger contractures reported stress trigger events than those who had developed contractures.

New strenuous manual activities
Almost twice as many people who never had finger nodules reported activity trigger events than those who had nodules.

Changes in medicine or medical diagnosis
Although the numbers were small, a higher percentage of people who were 50 or older when diagnosed reported a non-Dupuytren medical event than those who were younger than 50 when the first signs of Dupuytren appeared. 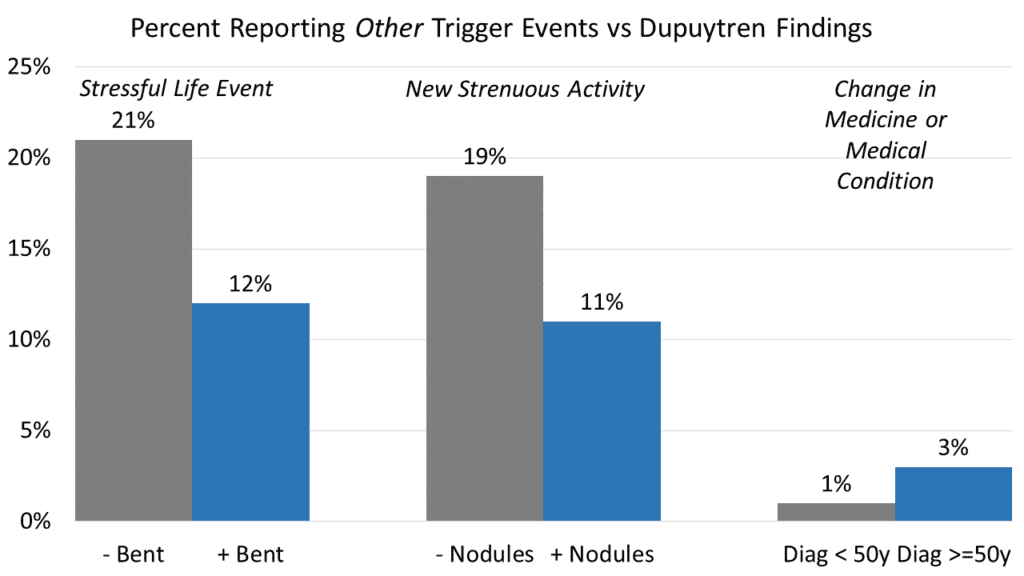 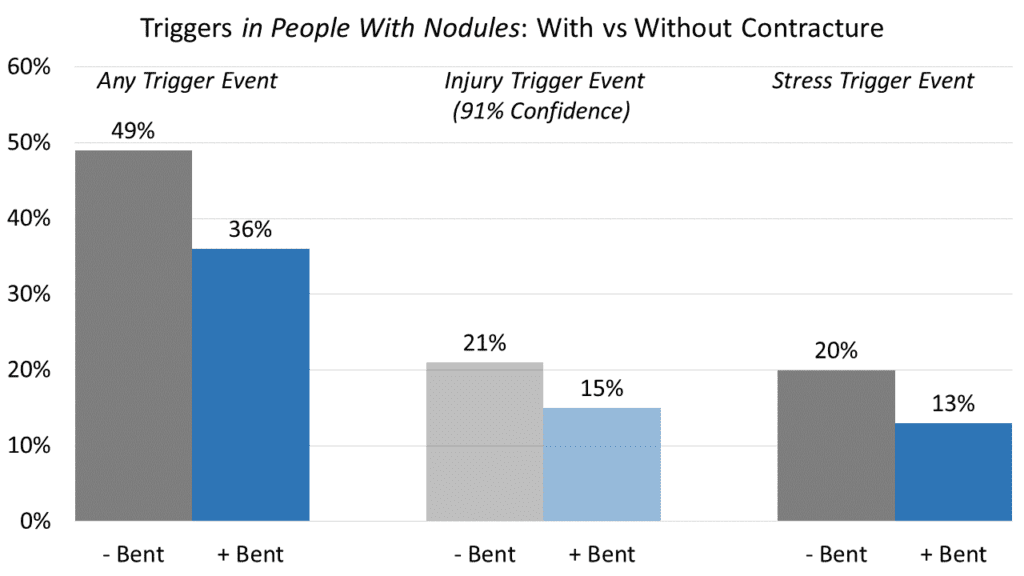 What does this mean?
Trigger events do influence the onset of Dupuytren disease. Based on anecdotal experience, it’s commonly believed that trigger events play a role in the first appearance of Dupuytren. This study confirms there is a relationship – but it’s complex and only for a subset of Dupuytren patients.

It’s not black and white. Trigger events are common. Everyone – people with mild, severe, and no Dupuytren risk experience trigger events on an ongoing basis. If Dupuytren follows a trigger, the trigger is more likely to be remembered; if not, more likely to be forgotten. It is complicated and the relationship to diathesis remains unknown. The important point is that this study showed that triggers do impact Dupuytren onset and that the overall outlook may be better for those who believe that something triggered their Dupuytren disease.

Thanks very much to everyone who participated in this survey. Your participation is the ultimate resource to better understand the complex world of Dupuytren.